Resolving Analysis Services “The provider ‘SQLNCLI.1’ is not registered”

I know. While everyone else is moving on to SQL 2012 here I am upgrading a SSAS 2005 cube to SQL Server 2008 R2 Analysis Services. I can hear Garth imploring me to “Live in the now man!“

So as I went about the mundane task of upgrading a cube from a really old version to a not so old version: WHAM! Failure! 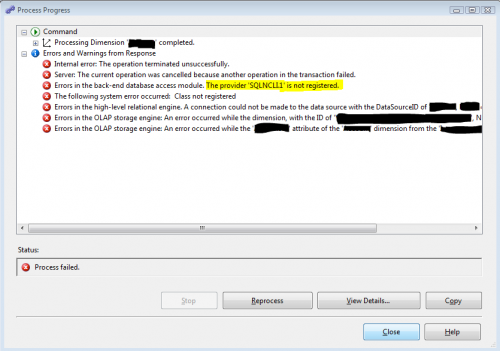 So I dutifully tested my connection. Found it worked and started scratching my head. Then buried deep in the bowels of the MSDN forums I spotted the answer (conveniently not labeled as the answer).

It turns out that when the upgrade occurs you end up with the wrong SQL Native Provider. Open up your data source designer and examine the connection string. If you see SQLNCLI.1 you have just stumbled on the source of your problem. (Yes, I’m assuming you’ve got the same problem as me since that’s more than likely the only reason you’re still reading this masterpiece of technical literature). 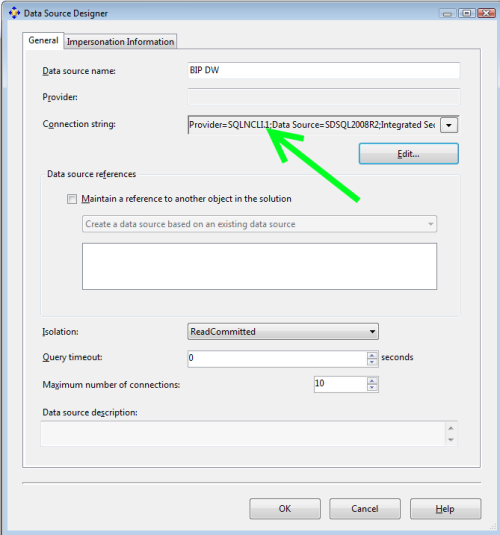 Hit the Edit connection string button and take a look at the Provider drop down. Native OLE DB\SQL Native Client? There’s your issue.

That should be it my friend. Hit OK and process your cube and you should be good.

But wait! When’s the last time you watched a Wayne’s World clip? How about the very one where Garth says “Live in the now!” Well thanks to the miracle of YouTube here it is: