Radar Chart? You must be kidding.

I’ve been thinking about the display of data quite a bit lately.  Some ways of presenting data are clearly more effective than others.  When providing data in a visual format the goals are one of the following:

This brings me to the annoying Excel radar chart.  File this one under “Just because you can doesn’t mean you should.” I’ve yet to come across a situation where this monstrosity was the best choice.  I tried to give it the benefit of the doubt and did a little Googling to see what I came up with.  This led me to “Using a radar chart in Excel to see the big picture” which contained the following gem which I think illustrates my point perfectly:

I hate to be a hater but as a French coworker used to say: “Are you joking me!?!”  If this is the “more clearly revealed” version of the data I don’t want to see the previous attempts.

Luckily, the sample data was included so I went ahead an took a shot at recreating the chart using a plain old boring line chart: 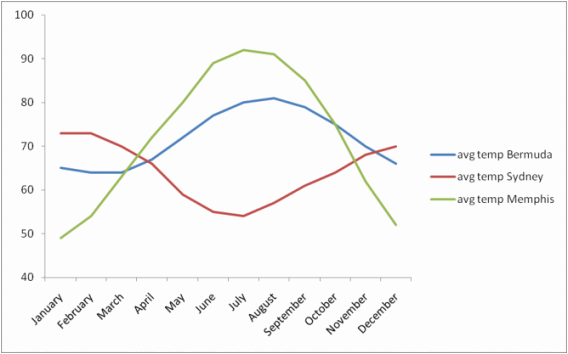 Hmm, I’m not sure what the “big picture” was that the original radar chart was showing us but using the line chart it is very quickly obvious that:

In the end it’s apparent a line chart is a substantially better choice for this data and allows the viewer to analyze the data substantially faster than the radar graph.